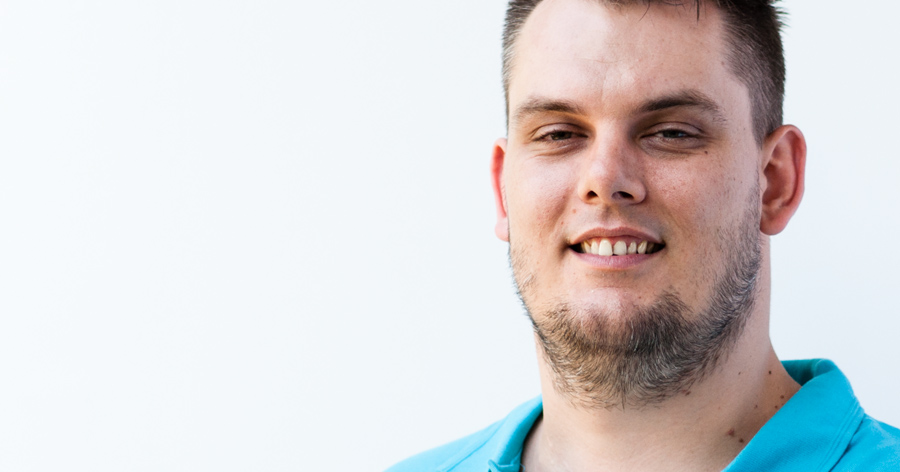 Jan Vočka’s life changed during the last holidays after elementary school. At the children’s camp, he jumped head-first into the water. “I was lying under the water for about three minutes. There were a lot of friends around me, but no one was paying attention to me, everyone thought I was diving,” says Jan. “As I was lying under the water, someone took my head, lifted it above the surface, and told me not to make fun of him. And he put me back; then someone realized I wasn’t kidding.”

His friends pulled Jan out of the water. They asked him to move his arms and legs. But that was not possible. “After the impact, I had a spinal injury; I had pins and needles in my spine, and when they put me ashore, I put my hands above my head. And that was all I could do. I couldn’t move my legs anymore.” Immediately after the injury, Jan was not running short of it. For some moments, he felt unconscious several times. His friends tried to get him to communicate when he was conscious until the ambulance arrived. “Even today, I can’t answer why I did it. I was not at the camp for the first time; I bathed in the same place the year before. I knew it there. I do not know what I was thinking. I cried for a few nights.”

The nearest hospital was in Český Krumlov. “But there they said they would not do anything for me, so they sent me straight to České Budějovice,” recalls Jan. The probability of surviving a complex spinal cord surgery between the fifth and sixth vertebrae was four percent.

Even though he did the surgery despite the statistics, he didn’t win—he was suffering from high fever. “And so, I spent a month in the infant. They looked after me like a baby, and it was great. Well, then the six worst months of my life followed in a rehabilitation institution in Kladruby,” he says.

He doesn’t want to think back to the experience of Kladrub. “It’s a long story, I’ve been through a lot of bad things. From bullying to poor care. But on the other hand, I’ve grown up incredibly there.” Like others with similar experiences, Jan admits that other people’s company helped him after the accident. “They assured me that even though it’s going to be harder now than it used to be, life doesn’t end. So, I worked to believe it.”

Jan was initially supposed to start a carpentry business after elementary school. That was unthinkable after the accident. My parents wanted me to have an education, so they looked for options. Two were offered – Jedlička’s institute in Prague or Kociánka in Brno. By studying in the company of people with health problems, he became even more at peace with himself. “I realized I was still quite lucky. I met people who knew they had five years left of their life. Their muscles were weakening, and no one could help. They couldn’t have done it.”

He successfully finished his studies at the Business Academy and decided to stay in Brno. “My family is from South Bohemia; they live 300 kilometers from Brno. In that time, I needed to feel a moment of freedom; it was essential to me to live alone.” At the same time, he found his first job. Although he didn’t know anything about computers at first, he started working in a call center as technical support. If a customer called that his internet wasn’t working, he tried to figure out where the error was. “I had to learn everything. But again, it helped me a lot.”

He subsequently worked for four years as an accountant at a company specializing in accessories in gastronomy. Then he took the position of PR manager and website management in the Wheelchair League. At a reconditioning stay in Březejci, he met Michal Odstrčil, director of ParaCENTRa Fenix. “At the time, I thought that I needed a change, but at the same time, I liked that I was doing a job that made sense to me. And so, I found myself here,” explains Jan.

Wedding at the station

Today he works both as a PR organization and as a self-sufficiency instructor. Even with the occasional medical complication, he says he’s happy. For years, he has been in a relationship with Monica, whom he met with a friend who lives in the same house. “I didn’t always treat her the best, but I’m so glad she had the patience and stayed with me. She’s an amazing person, powerful, I respect her very much,” says Jan. Less than a month ago, he proposed to Monica. She said yes. “The wedding should be next year. We don’t know when yet, and we don’t know how. I like trains, I’d love to get to the place, say yes and go back. We had more ideas, and we agreed on this. But maybe we’ll do it differently,” smiles Jan.