Marek Šrůtka: Anger and remorse went beyond me 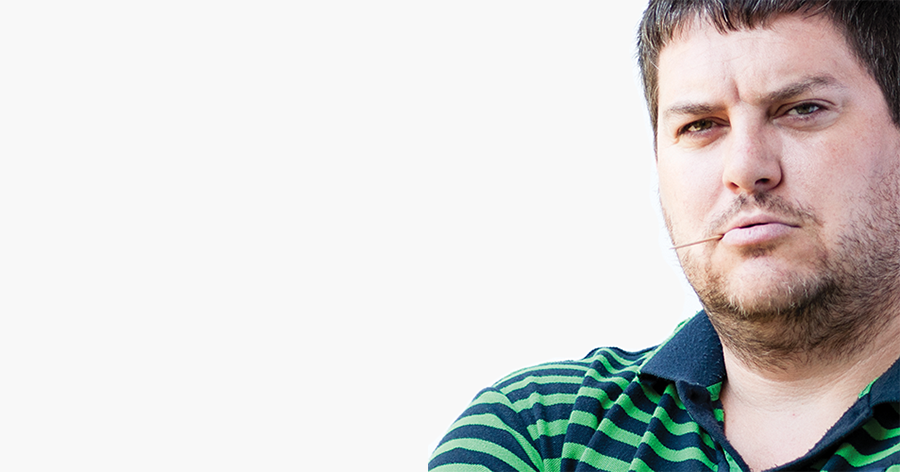 Marek Šrůtka grew up with his parents and younger brother in the village of Tvrdonice. He likes to remember his childhood, saying he was practically always outside. After primary school, he trained as a mason, then he joined the army in Řečkovice, Brno, for a year. He came home just before Christmas. He spent it with his family at home, then went to visit their grandmother in Krkonoše. “We always drive on the 26th. On the 28th, my brother and I went skiing that morning. In the afternoon we went skiing at Černý Dúl. At that time, there was only one ski lift in the area, no big resort as now,” Marek recalls. He adds that there wasn’t much snow, the piste was icy, they went down the hill ten times and made their way back.

“We wanted to do downhill skiing very quickly straight to the car. I stopped halfway through, and suddenly I realized that it is not possible to do downhill skiing. And when my brother got to me, I let it go again. And then, at one point, I was skiing at high speed.” In the gloom, he did not notice the track from the tractor and drove right into it at high speed. “I lost my poles, my skis, I don’t know for sure, but I guess I had to fly through the air. I ended up about fifteen meters from the slope among the trees.”

My brother thought it was a joke

“Nothing hurt me at all, but I couldn’t move. And when I hit my feet at that moment, I couldn’t feel it anymore.” After a while, a brother arrived, not believing that something serious had happened to him. “First, I begged him, then I scolded him, he kept thinking I was kidding. When I started calling out for help, he realized I wasn’t kidding.”

For about an hour and a half, Marek waited for the mountain service’s help, which in the meantime, intervened elsewhere. The locals brought Mark warmer clothes and gloves, it got dark, and the temperature dropped quickly. “When the paramedics arrived and loaded me, I felt pain in my back for the first time. My dad told me that when they dragged me on the sleigh, my legs hung immobile on the sides, and I dug up the snow with them.”

Mark was taken to Černý Dúl, where he waited for an ambulance for the next half hour. “Then, the old ambulance was finally there; that ambulance gave the impression of being the same ambulance from the Czech movie Básnící (The Poems). I told them I was still wearing ski boots, so I wanted to take them off. They said I had them down there a long time ago,” Marek recalls. Paramedics couldn’t get Mark to the ambulance because of his height. Only with an injection and bent legs, he was first transported to a hospital in Vrchlabí. From this part, Marek does not remember anything at all. He had already passed the examination at the Liberec hospital, where he was transported that evening from Vrchlabí. He underwent surgery at 11:00 p.m.

Two days after the surgery, while in the intensive care unit, Marek pretended to sleep and listened to the doctors’ conversation while having a ward round. “They talked about the fact that I had a completely broken spinal cord from what they saw, at ninety-five percent. It was all my fault, so some accusations or anger; it all went beyond me,” Marek adds, saying that he never blamed himself. It just happened.

I signed out against medical advice and went home

Four months later, followed in a hospital in Brno, he underwent one more spinal surgery, and in May, he was transferred to a rehabilitation institute in Hrabyňe. “That was horrible. While they were letting me home from the hospital on weekends and normally working in a wheelchair, here, in Hrabyně, they threatened to leave me after spinal surgery, gave me a stabilization brace, and didn’t let me go anywhere. I don’t have good memories of it. After five months, I signed out against medical advice and went home.”

“There were a few people behind me in the hospital who asked what I was going to do next and if I would be able to try the sport,” says Marek. He tried athletics; from time to time, he concentrated on the Championships of the Republic in swimming, from where he returned with medals. He was most attracted to basketball, even though it wasn’t that easy with the coach at first. “I’ve suffered half a year. Even though our team won with a big lead, sometimes they didn’t even put me up for the last five minutes of the game. There were much better players, but I had no way to get close to them.” Besides, he began to suffer from decubitus for more than half a year. He spent several weeks in the hospital, where his ischial bones were slashed, which should prevent the decubitus problem. “And when I got home, I got a call from the basketball school saying they had the money to get a tailored wheelchair. Subsequently, I also bought a better civilian wheelchair and a seat.” Then things suddenly turned in a better direction. About six months later, he and his team went to a Paris tournament, where a foreign coach looked up and asked if he would be interested in a contract in Germany. “I didn’t hesitate for a minute. At first, I went there to show up, and we signed a contract straight away. I stayed there for two years and got an adamant basketball school with everything.”

After two years, he fought with the coach, and it looked like he was coming home. Instead, he met a friend who lured him to an engagement in Sardinia. Marek says he didn’t hesitate for a moment. “It was actually like two years of vacation. There were many foreigners on that team, I was a little bit extra, but they kept me there, I trained with them, and I used to go as a substitute for matches.” He and a friend lived near the sea when it was beautiful, they said they could see the whole of Africa. After two years, the club got into trouble. “A year after I left, it ended up there completely. It looked bad when I left,” Marek recalls.

In addition to his sporting experience, he brought one significant social evil from Italy. “I started to drink alcohol there. I bought a bottle now and then after the match and drank it in the evening. Until I became a regular alcoholic for the next six years.” Although it seems he had a comfortable lifestyle, he was suffering from a huge pain. As every human in a wheelchair suffering from spinal lesions between the vertebrae Th12 and L1, Marek was suffering from phantom pains.

“Sometimes, the pain was unbelievably aching, and so I drank; it helped me. On the one hand, my legs didn’t hurt, but on the other hand, alcohol was killing me.” It helped him when doctors managed to find suitable drugs to relieve his pain. “From the moment I started taking them, I did not need to drink. My legs didn’t hurt; I didn’t need a glass anymore. The drugs help because they’re opiates. So, you could say that this is the same as drinking alcohol. I’m not an alcoholic anymore, but i’m a bit of a junkie,” adds Marek with exaggeration.

He currently lives in Brno, where he moved some time ago. “I was with my parents for four more years when I came back from Italy. They helped me; they took care of me. I owe them and my brother a lot.” Marek is employed in the Fenix Social Enterprise. He helps people in wheelchairs with a selection of incontinence products. He recently started with a floorball, still playing basketball for the Brno team, although he had already finished his 10-year playing career some time ago. Teammates call him “Hammer of Tvrdonice (Tvrdonické kladivo).” “I still enjoy it. Sport helps me not to get lazy. At least not more than I am now,” says Marek with a smile.