Martin Zábojník: I want to help others seize the opportunities I did not have 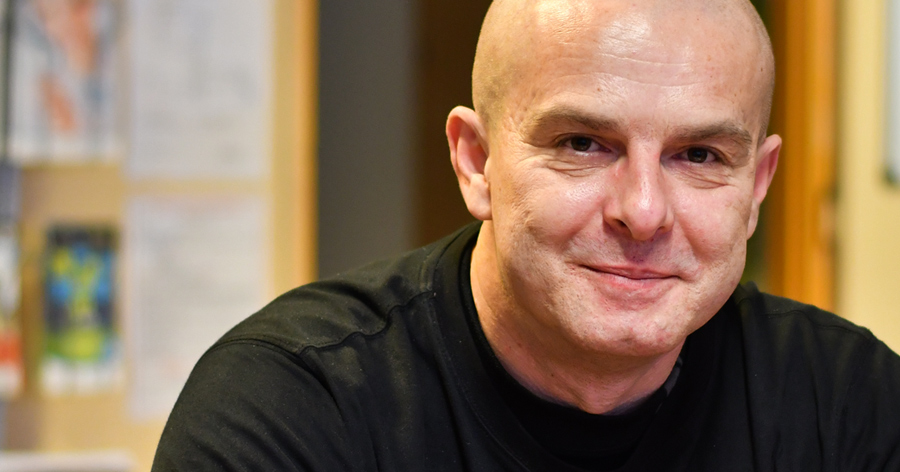 Martin Zábojník was born in Luhačovice in 1975 as the youngest of three children. “I was a vivacious kid, still out there, always doing something,” Martin recalls of his childhood. After elementary school, he began to learn metalworking in Uherský Brod. He worked for the Czech Arms Agency for a while, then for ČSAD, and spent a year in compulsory military service.

The fateful day in Martin’s life marks the 30th day of his life. In 1996, about two months after the end of the war. He went to the bar to see his friends. “By the billiard, we had such a nice idea that we would go to Břeclav picking cherries because they’re ripe. We didn’t know the man who was supposed to be driving was drinking. He’d been drinking coke all night, but no one knew he was adding rum to himself behind the bar.”

At four, they got in their car and set off on the road. “A friend who was sitting in front lived above Luhačovice, wanted to turn home to tell her parents we were going away. We didn’t even get to them,” Martin says. The driver was under the influence of alcohol and was showing off. He does not remember the journey itself, then learned the details from others. “It wasn’t until the hospital that I remembered I was getting in that car. Even for me to get in the passenger seat, but that friend wanted to sit in the front. So I let her go.”

A friend suffered a hamstring injury, Martin had three vertebrae crushed, and both lungs ruptured. “The funny thing is, I said I still wanted a cigarette from the doctor who saved me in the ambulance,” she says with a smile. The last friend involved has been a quadruple ever since. The driver escaped unharmed and unpunished. “I later learned that he had a family member in the police who had cut him out of various troubles several times. Nothing ever happened to him.”

After the accident, he spent a month and a half on the ARO, just as long in the trauma department. Because of his ruptured lungs, he had to undergo so-called conservative treatment – without surgery. Doctors have ruled out any major surgery. The patient wouldn’t breathe it. “And so I gradually grew up in the hospital. I’ve never taken it wrong. I was twenty-one, I felt immortal, I thought I’d move it in rehab, and everything would be fine.” He didn’t get back on his feet again. “But I still didn’t lose my temper. Nurses at the hospital and people at the rehabilitation facility in Hrabyni, everyone thought I was crazy. They knew what happened to me, and they knew I’d probably never walk again. And they knew I knew, too. I kind of never took it. I didn’t feel sorry for myself.” After returning from Hrabyna, he moved in with his parents. As in childhood, he spent most of his time away from home. “I drove twenty-five, thirty kilometers a day. Just be out there.”

In 2000, the sledge hockey team was composed in Zlín, and Martin has been offered to participate in the training. “It was fine, I enjoyed it, but the sledges were universal in size, the same size for everyone, and I flew in them terribly from side to side. When I spent an hour and a half on the ice, I had to heal my abrasions for a fortnight. And so, after less than two years, I blew it.”

But the movement kept luring him. “Then a friend told me that his friend was doing leverage and that they would be recruiting new disabled athletes at Brno fairs. He’s known me since I was a kid; he knew I had strength. And I wanted to do something again, so I went there.” From participation in the first race was the first place at the national championships. In six months, he won gold in Europe.

Successful in the world

He competed in the top race from 2001 to 2006, a period when arm wrestling, as the discipline is officially called, gradually established itself as a recognized, technically highly demanding sport. “It went incredibly ahead, and every year everything was different in terms of technique and categories. Not to mention handicapped racers. At first, we all raced together, I was in the category with the boys whose disability was that they bent their knees badly,” he recalls of the pitfalls that the world-class representation brought him. Often it was not possible to rely on the fairness of other competitors.

“At least twice, I was deprived of the title by a Ukrainian who used the cart only at races. Otherwise, you saw him walk, and apparently, he was nothing. Fortunately, today it is completely different, taking into account the severity of the handicap and the weight. She used to be a good word. No one weighed us, and no one checked to see if we met the category, it was enough for a man to nod it off. That’s how I competed for a couple of times with seventy-five kilos, with guys who were roughly over 90.”

After five years of active racing, he decided to quit after a setback at the World Championships in Manchester. “The man who beat me at the time didn’t push me either technically or forcibly, but he just pulled me out of the cart. And then he went to race among the healthy. Under these conditions, I got tired of it, and I was done.”

Kind of back at the lever. And now for coffee

He didn’t return to contact with arm wrestling until 2015. A friend asked him for help preparing for the World Cup in Malaysia at the time. “There was a wonderful bunch of people; we got along great. I enjoyed being with these people, racing again, and passing on the experience.”

Martin’s last major success came from 2017 when he finished third at the World Championships. “I have a dream of starting a club for younger boys. I’d train them, advise them on what and how. In 2024, arm wrestling should be the first time at the Paralympics as a discipline. These guys today have prospects for opportunities that I didn’t even have. And I would like to contribute to the use of them.”

Besides, the last year is devoted to the distribution of Brazilian coffee brand Orfeu. The grains are roasted directly in Brazil, which sets the mark apart from the other coffees that are roasted in our country. He and his companion Radovan got to the coffee through Martin’s older brother, who lives permanently in Brazil. “It’s starting slowly; I certainly can’t say it’s feeding us. The coffee market is pretty oversaturated these days. I believe that one day it will come, we have already acquired a few subscribers. Let’s see how it goes. But I believe it’s just going to work.”

The first public training of arm wrestling under Martin’s leadership will take place on Thursday, February 7, at the ParaCENTRA Fenix gym. You’re all cordially invited.